When We Print For Someone Famous 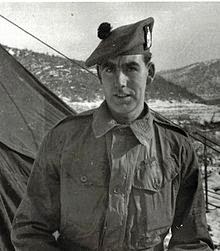 We produced some business cards for a very special person a couple of weeks ago.
The cards themselves were unremarkable – simply black ink on white card but they will probably be valued by all those who receive one in the next month or so.
The cards were ordered on behalf of William Speakman-Pitt (better known as just Bill Speakman).
He is famous because he is one of only six living recipients of the highest military honour this country can bestow.
He has been awarded the most prestigious military award for gallantry – the Victoria Cross.
It was awarded for his considerable acts of bravery when serving with the Black Watch during the Korean War.
He has now made a decision to donate his medals to the country of Korea rather than display them on his chest at the Chelsea Hospital.
A full account of his heroics and background to the story was shown on television and online at the BBC (http://www.bbc.co.uk/news/uk-england-manchester-32396241).
He is currently in Korea to attend a number of commemorative events.
When he meets up with other veterans and various dignitaries – he wants to sign and hand out the business cards as a small memento.

Who Else Have We Done Printing For?
This got me thinking about the printing we have done for other famous people or interesting characters over the last twenty years or so.
There have been various politicians, knights of the realm, seriously wealthy businessmen, sportsmen and a few very successful entrepreneurs.
Quite a lot of celebrities want postcards that they can sign and hand out or sell at various events they are attending.
The problem with dealing with some businessmen or entrepreneurs is we often do not recognise them when they come in.  And appearances can be deceptive.  We never try to make any immediate judgement.
One seemingly  “eccentric” customer pulled up in his jeep on the pavement outside our premises to order some printing – wearing just shorts and a T-shirt we later realised he had been a founder of one of Ireland’s largest businesses and was just in England visiting some friends.
Then there is Sir Malcolm Guthrie with a background in motor racing, who calls in occasionally wearing his Stetson hat and cowboy attire, and exuding his “larger than life” personality.


The Power of Television
But it is the power of television that makes personalities recognisable.
And when we see people from TV in real life we almost assume we know them.
We don’t often get TV stars walking through the door.  But earlier this year a gentleman who has been reading the local evening news on ITV for the last 20 years or so came in and ordered a complete range of personalised stationery.
It was like serving an old friend rather someone you met for the first time over the counter!
The problem is even worse for the TV “soap” stars.
They could be on our screens a few times a week and usually have to portray a completely different personality to their own.
One of our local customers was Johnny Briggs who played Mike Baldwin in Coronation Street.  He was often cast as the “bad guy” in the programme and was often confronted by members of the public trying to persuade him to “change his ways”.
Even when collecting his children from school he would often prefer to wait inconspicuously in his car with a hat on rather than stand by the school gates.


The international reach of film and television
Another of our regular customers became a millionaire when he created an ingenious piece of software to stop all our computers from failing at the turn of the millennium.
It was never required because the computers kept working but his contracts with most of the world’s leading computer manufacturers funded the real “love of his life” which was making films.
He set up his own production companies and created a number of short films using some famous actors in the later years of their careers.
Sadly in about three cases they turned out to be the last films they made – one of these actors happened to be Norman Wisdom.
For those who don’t know Norman Wisdom – he was probably the most famous actor in Albania in the early days of television.
His particular brand of comedy was acceptable to the communist censors – who wanted to avoid showing anything glamourous from the decadent “western world”.
And because this particular brand of comedy was mainly visual it could be easily “translated” internationally.
As it turned out that this particular short film became particularly popular in Albania and was a roaring success.
And it also was around this time that another of our long-standing customers sold a series of cartoon programmes that became well-known across the Soviet Union.
Jim Driscoll from Stourbridge created the “Shoe People” cartoons based upon reading his children stories at bedtime and little realised that it would be such an international success.
My current graphic designer was one of those artists who drew the characters and scenes by hand before the days of computer animation.
The success was again the result of communist countries trying to avoid the expansion of Hollywood into the homes of their own citizens.
However, Jim did have one major problem to overcome.  How was he to be paid when the rouble had virtually no value in the western world at that time?
The answer was payment in art treasures and artifacts.
In return for the cartoons the Russians supplied paintings and various artworks that could be converted to hard currency in England.
His son, Adam, was put in charge of A4 Publications, a company set up solely to sell the paintings through contacts in the art world.
We managed to print some magazines and catalogues for mail order and it would be interesting to see what value these paintings would have in the current day.

So, we never really know where some of our printed products will end up.
And hopefully, there will be a few people so impressed with our business cards that we will start selling online to customers in Korea very soon!