The death of print is continually proclaimed, yet even in this digital age there is something irreplaceable about being able to touch and feel something that is real and tangible.

And nothing demonstrates the value of print more than the Christmas card.

The first Christmas cards were commissioned by Sir Henry Cole some 170 years ago.   Costing a shilling each – 1000 cards were printed and produced as a luxury item for the wealthy of the time.

According to recently published research from One Poll, an overwhelming 72% of people preferred to receive a traditional card to any electronic festive greeting sent through social media channels, whilst more than a quarter of people either ignore or delete e-cards.

Cards tend to evoke memories and emotions – they are visually attractive (usually!), tactile, environmentally friendly and recyclable.  The Christmas card market is unlikely to die.  They are all about keeping in touch, keeping emotional connection, reaching out to spread caring and goodwill at Christmas time.

We have to be realistic that more and more of our customers are from the younger generation who prefer to click a few buttons on their mobile.  But there are certain people you would surely always get a card for?

The main priority for personal cards are family members – with over half saying a card to Mum (56%) and just under half (44%) saying a card to poor old Dad.  The growth cards are in the volume of single cards – where there was a value increase of £6 million, up from £148.4 million to £164.4 million.

As a business, our customers are the only reason we are able to grow and develop.  This is the one time of the year we can easily express our appreciation for their loyalty and support.  There is a strong case to be made to continue making this investment year on year.  We send out cards to our top customers in the year and with all statements in November and December because the postage is being paid anyway.

Despite the cost of postage, 50% who took the survey anticipated sending the same number of cards or more this year.  The Greeting Card Association estimated there were 800 million cards sold in the UK in 2013 worth approximately £200 million.  It is no wonder that they form such an important part of the seasonal decorations around the home.

Interestingly, snow scenes topped the popularity list with more than a third of recipients preferring a wintery image on their cards.  I am not sure what the results would be if a similar poll was undertaken in the southern hemisphere?

I also found this out too late for the design of our own Christmas cards this year – but will come in as useful research for the 2015 card! 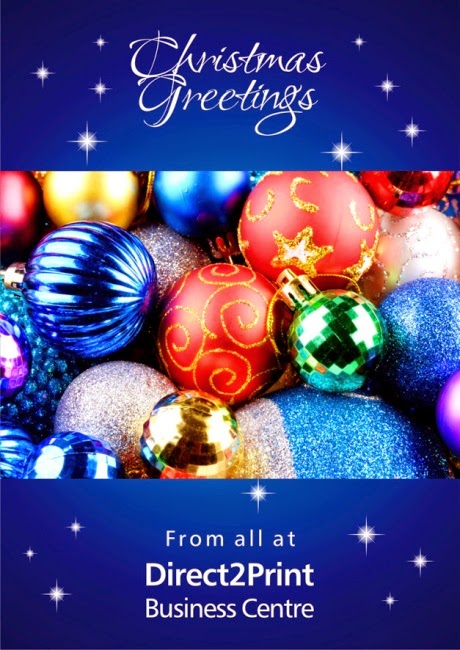 Maybe, just maybe, they could even appreciate in value!

Apparently, one of those original 1000 cards sent by Sir Henry Cole to his grandmother in 1843, was sold at auction in Devizes, Wiltshire for £20,000 on 24 November 2001.  How many e-cards will ever appreciate in value?

Anyway, despite being a print business we will still send cards in every way possible this year – by post, by hand, by e-broadcast, even by social media.  This is not only due to quantities of people who now interact with an online business but also because of speed and convenience of online business communication.

But there is no doubt that print still wins – for this year at least!
Posted by Unknown at 7:40 AM